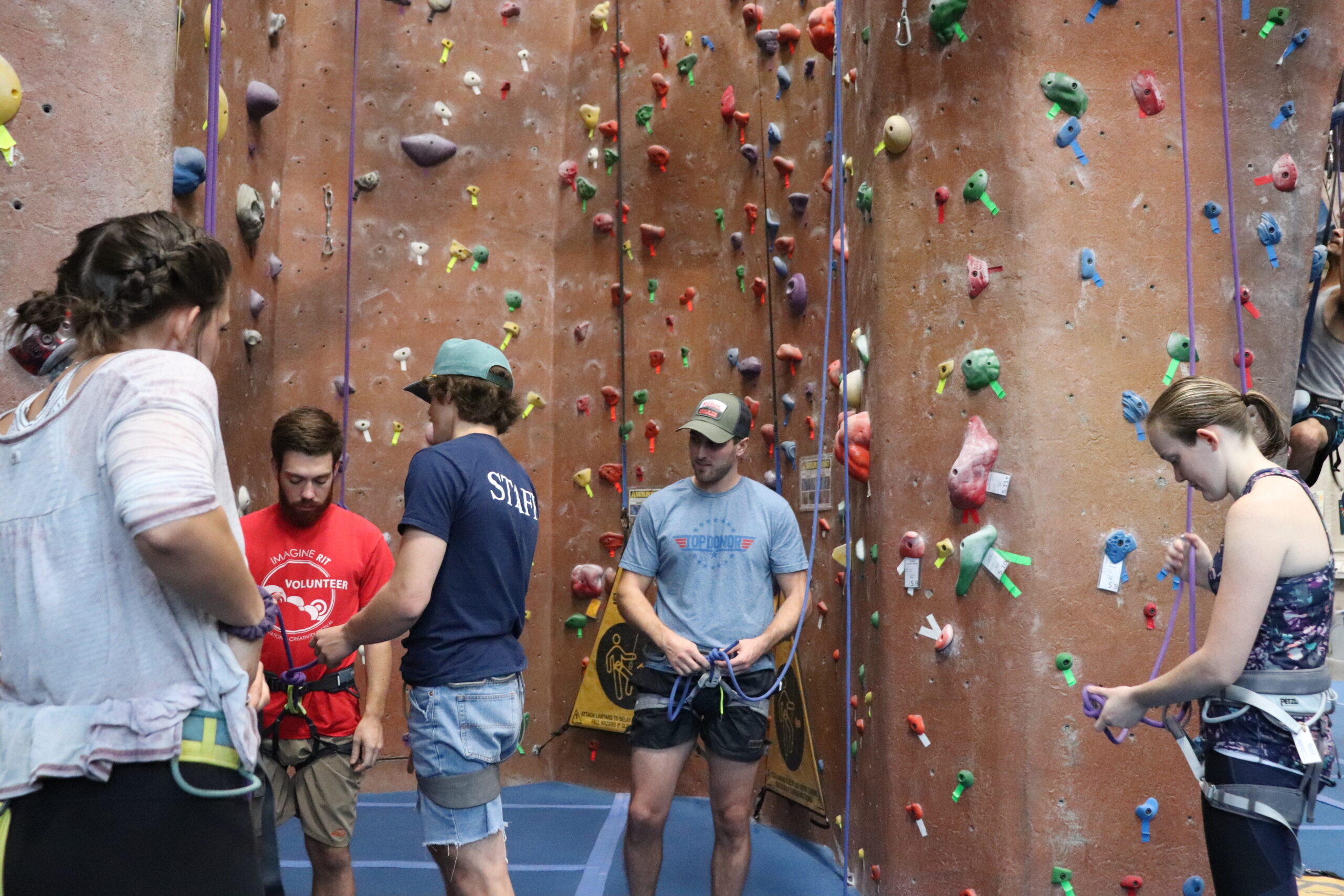 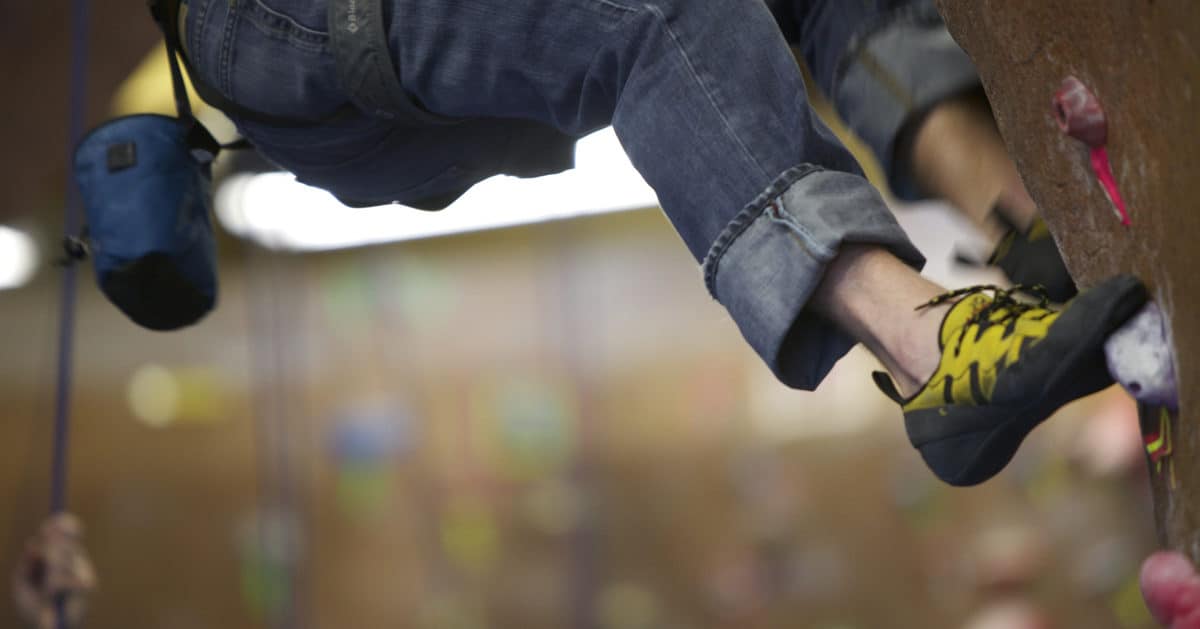 Ready to move beyond the auto belays? Sign up for a Belay Class HERE!

Are you interested in becoming a River Rock Member? For membership pricing, benefits, and more, click HERE!

What is Rock Climbing? 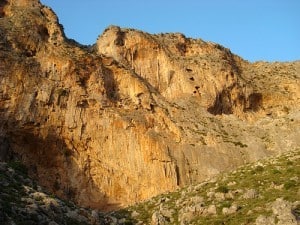 Rock climbing is an activity in which participants climb up, down or across natural rock formations or artificial rock walls. The goal is to reach the summit of a formation or the endpoint of a pre-defined route without falling. Rock climbing is a physically and mentally demanding sport, one that often tests a climber’s strength, endurance, agility and balance along with mental control. It can be a dangerous sport and knowledge of proper climbing techniques and usage of specialized climbing equipment is crucial for the safe completion of routes. Because of the wide range and variety of rock formations around the world, rock climbing has been separated into several different styles and sub-disciplines.

What is indoor climbing?

Indoor climbing refers to any type of rock climbing that occurs within the confines of a building or other structure, usually on specially constructed fake rock walls. This allows climbers to climb no matter the time of day or condition of weather. Indoor climbing is often used for improving climbing skills and techniques, as well as for general exercise.

Top-roping is a great entry point into roped rock climbing. Falls are seldom serious because the rope always does its job of catching you (when your partner is handling it properly), minimizing risk of injury. Traditional top-roping requires that another person assists you as you climb, the art of belaying. This extra man is responsible for feeding you rope and lowering you as you descend your route, using a friction device such as an ATC or Gri-Gri to do so. You’ll also observe in a number of recreational facilities (such as River Rock) something called an auto-belay a device that acts as an anchor at the top of the route and serves to catch you if you fall. In the end, top-roping is a great way for beginners to get used to rock-climbing, but it can also be a preferred way for veterans to learn and practice a new route.

This style of climbing is extremely versatile, offering a range of difficulties as well as a range of route-lengths. Overall, though, lead and sport climbers predominantly focus on the moves and techniques they use to get to their destination rather than the destination itself. In lead and sport climbing, falling is expected and planned for accordingly. A climber working on a difficult route may fall dozens of times before he finally accomplishes it. The use of rope in lead and sport climbing differs slightly from top-roping, though, in that there are a number of pre-fixed anchors bolted into a wall or crag. These anchors follow the path of the pre-planned route from the beginning all the way to the end. It is the responsibility of the climber to loop her rope through carabiner systems called quickdraws attached to each of the bolted anchors as she sends the rock. Don’t forget – if you go lead or sport climbing, you’ll need a partner belaying you; meaning feed you rope, catch your fall, and lower you down.

Where sport climbing focuses on the physical intensity of the journey itself, traditional climbing is all about the holistic experience and the mental game that accompanies these climbs. Routes sent traditionally do not have fixed anchors permanently bolted into the wall/crag. Instead, the climber is responsible for inserting protection into cracks in the rock. Attached to each protection piece is a sling and carabiner used to keep a climber secured to the wall. As you can probably imagine, traditional climbing also involves the added challenge of carrying all of this essential gear along with you as you climb. Just as with top-roping and sport climbing, though, traditional climbers need a belay partner to feed them rope and lower them back down.

While not the most common form of climbing, big wall climbing is arguably the most notorious. Think… traditional climbing multiplied exponentially. Requiring ascents
of at least 1500 feet, these routes often take several days to send, forcing daring climbers to spend nights on portaledges hanging hundreds, if not thousands, of feet above the ground. California’s Yosemite Valley is an international mecca for this style of climbing, heralding intrepid climbers from all around the globe. Big wall climbs are not for the faint of heart – any kind of climbing, because of gravity, is dangerous in its very nature, but big wall climbs are certainly the most perilous. Of course, proper precautions can always be made to keep climbers safe – to a certain extent. In order to make all the proper precautions, however, climbers will be required to invest in proper gear (and a lot of it), making big wall climbing far more expensive than its less-intensive counterparts.

There are two forms of climbing that involve no rope at all, and bouldering is by far the safer and, consequently, more popular of the two (the other is free-soloing). With routes rarely more than fifteen feet high, bouldering is essentially a scaled-down version of sport climbing. That is, repeated falling is expected, and the climb is all about the moves and technique. Bouldering, aside from being relatively safe, is popular for another reason it’s far less expensive than other forms of climbing because it involves minimal gear. If you’re bouldering indoors, then all you need is proper athletic clothes, climbing shoes, and a chalk bag. Outdoors, you’ll also need some crash pads as well. In the end, though, it’s ultimately just you and the rock – no rope to help (or hinder). Also like sport climbing, bouldering can be very competitive. Boulder problems are graded according to difficulty. Around here, you’ll most commonly see bouldering routes graded according to the V system. The grading system is subjective and usually differs from person to person, but (generally) beginners’ routes range from VB to V2, intermediate problems most often fall in the V3-V4 range, and advanced problems are V5 and above. But to give you some further perspective, the world’s best boulderers climb in the V14 and above range, problems that are each exponentially more difficult than a V5. Ultimately, each progressive grade is significantly more difficult than its predecessor, and the more difficult the grade, the longer it takes before a climber can progress to the next one. Additionally, climbing on rugged rock outside can make a difficult route even more difficult because of the physical wear and tear it induces on your fingers.

a permanent form of protection that is drilled into a rock, to which carabiners can attach

(Biner) a metal coupling link with a safety closure that can open and close, used to hold gear or as anchors for belaying

climbing without using your legs or feet

a technique in which a climber presses her fingertips flat on the small surface of a hold and raises her knuckles, often also placing her thumb over the top of her index finger and partially over her middle finger

the act of jumping from one hold to the next, losing all contact with the rock while in mid-jump

to complete while placing protection a route after many unsuccessful attempts

to cleanly complete a route

to begin a climb while sitting on the ground

to climb in a horizontal direction

Climbing is a sport that all ages and abilities will find fun, challenging, and exciting. Come see what we have to offer!

All level yoga class instructed by Uttara Yoga. Every Monday, Wednesday, and Thursday from 6:30-7:30pm. Free for gym members. Limited to 10 participants per class, first-come first-serve.
7:30 pm Belay Class
Belay Class
Sep 28 @ 7:30 pm – 9:00 pm
In the Basic Belay Class you will work with our instructor and learn the technique of belaying. After taking the class and before your first time climbing, you will be required to take a... Read more »
Sep
29
Thu
6:30 pm All-Level Yoga
All-Level Yoga
Sep 29 @ 6:30 pm – 7:30 pm